What are the parts of a rod set?​

What are the parts of a rod set? 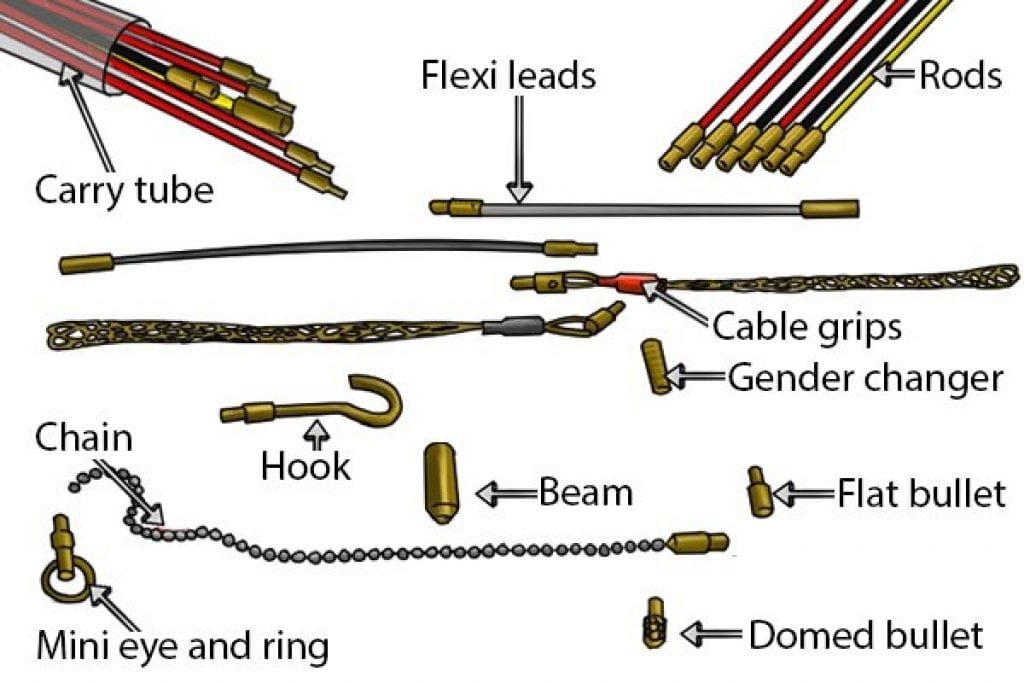 Some rod sets contain a fluorescent rod, which can be used in dark or confined spaces to keep track of the rods and cables.

All of the rods are used to pull and push wire and cable through ceiling, wall and floor cavities.

Hook – The hook is used to catch cables for pulling or to retrieve items that have been dropped. All attachments, including the hook attachment, are screwed into the female thread end of a rod set.

The hook either catches hold of a guide cable, which in turn is connected to an electrical cable, and pulled through, or it catches the cable itself. A guide cable is simply a piece of string, wire or thin cable that is dangled in a cavity so that it can be located and attached to a cable and used as a guide for the cable to follow.

A gender changer can be placed between two rods to enable them to be joined together, where the rods have met and their threads are incompatible because they each have a rod or an attachment at the other end.

Domed bullet – A domed bullet can be screwed into the end of a rod to stop dirt and debris from getting into the end, if you’re in a particularly dirty or dusty environment.

Its main task is to guide a rod smoothly into place over a short distance, which is why it has a domed head – there are no corners to catch and snag.A domed bullet is a useful attachment which is screwed into the female thread at the end of a rod, ready to guide the rod into place.

It is also used for extra force on minor obstructions when guiding a rod into place; the flat head helps to push past the obstruction or push it out of the way. Most of the rods in a rod set are either glass reinforced plastic (GRP) or nylon rods. Beam

A beam is a bright light attachment which fits onto the end of a rod and allows the user to see into dark spaces without having to use a separate torch.

Ring – Most rod sets contain a mini eye and ring, which is used to tie cable on to the rods. A cable is tied to the ring and mini eye of a rod set, ready for pulling through a cavity.

Magnet – Some of the magnetic attachments to the rod set are capable of picking up dropped tools, including heavy objects such as a lump hammer, which weighs around 2.5kg.

Chain – There is a chain attachment to a rod set, which is used together with a magnet attachment to pull a cable through a cavity.

The chain is attached to one rod and cable that’s waiting to be pulled through a cavity, and then the magnet is attached to a second rod that is pushed forwards until it finds the chain.

Once the chain, magnet, rods and cable have all met, pull them all back towards you at your starting point.

Flexi lead – There are two types of attachments called flexi leads, or flexible leading rods, both of which are used to help to guide rods in tight and awkward spaces.

The basic flexi lead is fitted to the first rod of a set to start the process of putting a rod through a wall or ceiling cavity, where there is an immediate awkward bend or angle.Using the rod alone could make it harder to access the space.

Pre-bent flexi lead – The second type of flexi lead can be pre-bent before it is attached to a rod. It is then used as a guide for the rods where the shape of the tight corner or awkward space is already known.

The grips come in a variety of sizes to fit over cables from 4mm to 30mm in thickness. Most rod sets contain a cable grip.

Carry tube – Most rod sets are sold in a carry tube, which is a convenient way to keep all of the rods and parts together. It also ensures that the rods are kept clean and dry, when not in use.

Small carry tube – These sets can be carried in a small carry tube, which conveniently fits into a toolbox or hangs from a tool belt.

A brief history of Rod Sets

What are rod sets made of?