What is a mattock?

What is a mattock? 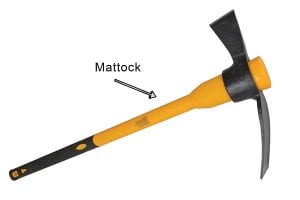 The mattock is a hand tool that is often mistaken for a pickaxe. It is used for digging and chopping.

Mattocks are very similar to what is called a Polaski in America. This tool gets its name from Edward Polaski, the forest ranger who developed it in the early 1900’s.

The mattock has a long handle made of wood or fibreglass, and a solid metal head, which can have either an axe blade combined with an adze (horizontal blade) in the case of a cutter mattock, or a pick and an adze as in a pick mattock.

What is the difference between a mattock and a pickaxe? 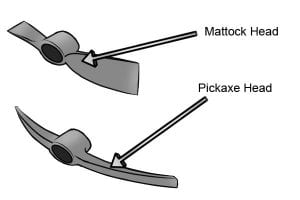 Today, the terms ‘pickaxe’ and ‘mattock’ are often used to mean the same thing; they are however different tools.

A mattock has a broad adze (horizontal blade) usually with a pick or axe on the other end of the head.

A pickaxe has a pointed pick at one end of the head and a narrow chisel at the other.

What is the difference between a mattock and a pickaxe? 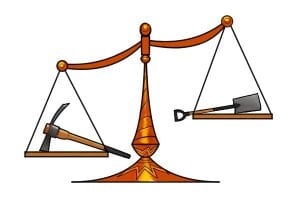 The combination of the adze and an axe or pick make the mattock two tools in one.

The momentum of a heavy mattock head at the end of the long handle will give the axe greater momentum and force than you could achieve with a spade even if you used your foot to apply more pressure, whilst the adze allows earth to be moved using the same tool.

A brief history of the Mattock