What is an engineer’s square?

What is an engineer's square? 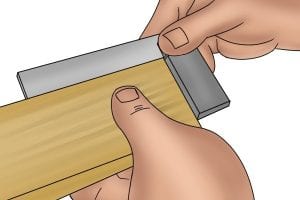 An engineer’s square is a tool used in metalworking and woodworking. It is very similar to a try square in appearance and use, and is mainly used to check a workpiece is ‘square’, (that is, two sides are at 90 degrees to one another).

It can also be used to help draw or scribe a line at 90 degrees to the edge of a workpiece. 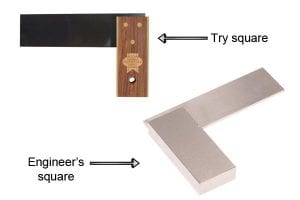 There are several small differences between an engineer’s square and a try square; the main one is the accuracy to which they are made.

An engineer’s square has to be made to conform to the British Standard BS939, and should be accurate to within its tolerance range on both the inside and outside edges of the blade and stock (thicker base part of the square), unlike a try square which is only accurate on its inside edges.

Additionally, the stock of an engineer’s square is usually made entirely of metal, whereas a try square’s stock is usually made of hardwood such as rosewood, beech or maple, sometimes with a brass facing.

Due to their superior accuracy and greater ability to remain square, engineer’s squares are replacing the use of try squares in woodworking.

The origin of the engineer’s square can be traced back to other square tools, such as the carpenter’s square. Exactly who invented these and when, is not known. According to the Greek writer Pliny, the square and many other tools, such as the level, lock and key, and turning lathe, were invented by a Greek from Samos called Theodorus during the 6th century BC.

This was later repeated by the astrophysicist Carl Sagan in his TV series ‘Cosmos’, however in the case of the square it is almost certainly incorrect. This is because wooden squares used by the Egyptians to build the pyramids were found in the tomb of Senutem at Dier el-Madina, which date back to the 14th century BC. These are now on display at the Egyptian museum in Cairo. 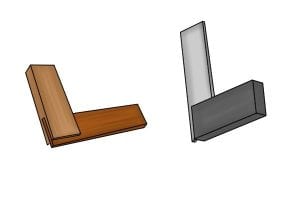 Many other examples pre-dating Theodorus have since been discovered.

Early squares were made of various types of wood, but at some point in the middle ages, blacksmiths as well as stone and brick masons began to use metal squares.

The manufacture of engineer’s squares as we now know them was not possible until the invention of more precise measuring instruments during The Industrial Revolution (1760-1840). 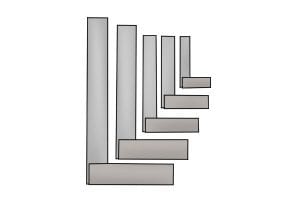 This coincided with the desire of engineers at the time for improved accuracy in many tools, which was needed in order to produce accurate standardised parts for use in machines and other applications. The engineer’s square became an important tool for engineers at the time, and has remained so ever since.

What are the parts of an engineer's square?