In this article, we give you a complete Makita angle grinder review. In honesty, this is one of the easiest testings and reviewing of a power tool that we have done. That’s because it’s pretty clear what are the best Makita corded and cordless angle grinders. They lead the market in their field and depending on your needs and budget, you will be wanting to pick one of these two incredible power tools. 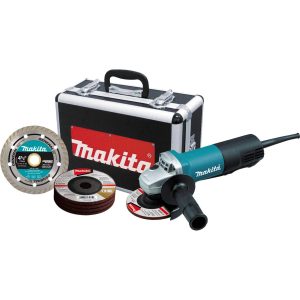 One of the most popular and well-respected angle grinders (across all angle grinders, not just Makita’s) is the Makita 9557PBX1 Angle Grinder. The simple reason the Makita 9557PBX1 is the best-of-the-best is that it is the complete tool and delivers in every way. It boasts a powerful and efficient 7.5 amp motor, which is more powerful than the majority of compact models.

It’s build using high-quality materials with an aluminium case makes it extremely durable and reliable, allowing you to use it in the roughest of environments without worry. Finally, there’s the flexibility of AC and DC power, depending on your location and what is best to serve your needs for that particular job. As with many things in life, it’s the small details that matter. 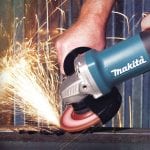 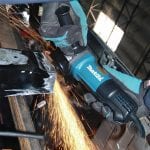 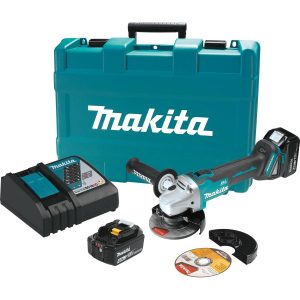 The other big player is the Makita XAG03M. This 4.5-inch angle grinder is simply one of the most popular and quality power tools available on the market. For a long time, many contractors avoided cordless angle grinders because they require so much torque for their projects, and cordless models failed to deliver such a high performance. When Makita released the XAG03M angle grinder they changed the game slightly.

The battery does tend to heat faster than a corded model so it would take longer to finish a lot of heavy-duty work on welds but other than that, we were really impressed. As far as cordless angle grinders go, the Makita XAG03M 18V is a stand out performer, and you get all that peace of mind of having an industry-leading brand buying a Makita power tool. Expect reliability and durability as standard with the latest technology packed into this device. 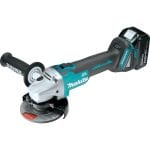 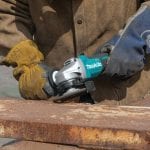 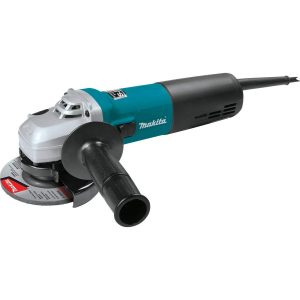 The power comes from its 12 Amp motor which is linked to a 5-stage variable speed dial allowing you to control the power output from 4,000-9,000RPM. Add to this a clever tool-less wheel guard adjustment allowing you to quickly and easily change blades in and out depending on the job. It is also packed full of Makita’s safety technology such as the super joint system that prevents the tool from damaging in case of snagging or catching.

We really rate the Makita-9564CV because it’s so easy to use, especially for beginners. It is well designed to make it safe around the home and for contractors without losing anything in performance. Finally, as with all Makita angle grinders, durability is guaranteed. 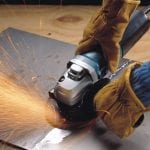 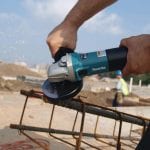 An angle grinder has a few names, so let’s just make sure you’re on the right page and looking at the right tool. Here are some of the other names associated with angle grinders:

Makita angle grinders are some of the best angle grinders for heavy-duty tasks such as cutting metal and stone. In comparison to other leading power tool brands, Makita tend to stand out in the area of high power outputs in all their angle grinder models. But it’s not just cutting materials that they’re used for, they’re equally as adept at grinding and polishing.

When picking an angle grinder, you can take for granted that you need to have a tool made from the best materials which is intelligently built to be durable and reliable. Buying from a well-known brand like Makita provides complete reassurance of this as they are known worldwide as a high-quality power tool manufacturer.

Typically when picking the right Makita angle grinder for you, you’ll want to take a closer look at the main 3 factors. Below we have outlined these and what they mean to help you make the best decision for you. After reading our Makita angle grinder buying guide all you’ll need to do is decide which angle grinder best meets your needs and budget. If you are interested in knowing more about other angle grinders available on the market from other manufacturers then you should check out our best angle grinder review.

Grinding discs traditionally come between 4 to 12 inches in size. The more common tend to be on the smaller side of 4 to4.5 inches because they get through a load of work. The smaller discs are used as they make the angle grinder easier to use in tight spaces. However, on the flip side, if you know you need to be grinding or polishing larger areas then a larger disc will definitely be a better fit for your needs. That means it depends on if you just want a good all-rounder or you need an angle grinder for a specific task in a project.

In many cases, the size of the motor will go a long way in determining how much power you have. On the smaller size, you’re looking at a 7.5 amp motor. Which delivers plenty of power if you’re needing an angle grinder for smaller jobs in contracting tasks or around the house. They also tend to be cordless which makes them more practical to use anywhere as well as in tighter spaces.

In contrast, the larger angle grinders can go up to 12-13 amps motor sizes. If you find that you need a workhorse of an angle grinder that you use day in day out, or you work a lot with welds this is going to be a much better fit.

This seems like a minor point but it will go along way in determining the power and performance of the angle grinder. In an ideal world, you’d want a cordless Makita angle grinder because the cable restricts where you can use it and can also get in the way whilst you are grinding. But, even though the technology is advancing, you don’t quite get the same power. Well, at least not yet. You can get very good general purpose cordless angle grinders, but if you need to grind a lot of welded metals or polish larger surfaces, you should look at a corded angle grinder option to get the job done.

Any cookies that may not be particularly necessary for the website to function and is used specifically to collect user personal data via analytics, ads, other embedded contents are termed as non-necessary cookies. It is mandatory to procure user consent prior to running these cookies on your website.