It is simple, you just know that you’re getting quality with DeWalt. They are hands down one of the best power tool manufacturers that have ever existed, earning their place as a household name. The combination of performance, durability and reliability is matched with an industry-leading research and development sector means that they are always one step ahead of the game when it comes to new technologies.

Add to this the consistency of high-quality across their whole power and hand tool range is incredible and that’s why some contractors refuse to use any other brand. Not just in performance but in durability and reliability, but they also have a habit of being first to new technological innovation and advances.

Fitted with the next generation 11-amp AC/DC 11,000 rpm motor, this DeWalt angle grinder has a great balance of power to weight. It’s also a great size and is comfortable to hold as well as operate in tight spaces. The dust ejection system is cleverly designed so that it ejects harmful dust and debris. It’s no surprise to see this in DeWalt angle grinder as their safety features are normally the best in the industry.

It also has oversized brushes that double the brush life from the previous (D28402) model. This extra life saves you money on replacement brushes providing you with more value. Finally, there is a quick-change wheel that is easy to release. This makes changing the wheel simple and quick, as well as a safety lock-off to prevent accidental startups during or after the changing process.

The DeWalt DWE402 paddle switch angle grinder meets every expectation of a DeWalt power tool. It has a wide variety of functions that deliver great performance. But equally, it is simple to use which makes this a great angle grinder for beginners and professionals alike. Ultimately, it made the list because it’s powerful, lasts for hours and comfortable to use. 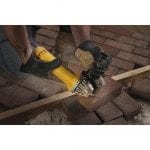 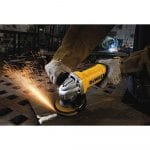 As a 7-inch angle grinder instead of the more standard 4.5-inch models, the DeWalt DW840 angle grinder is the “big brother” of the range. The size of this power tool is what allows it to boast a 13 amp motor capable of delivering 8000 rpm. This sheer power makes it capable of taking on any grinding, cutting or polishing project and delivering with ease.

It is not just powerful either. At Wonkee Donkee we love the intelligent design of the adjustable keyless guard that can be adjusted to your personal preference without the need of tools. The addition of a rear handle is also a great touch as it makes using the tool for longer periods so much more comfortable, allowing you to get on with the job at hand.

This is a seriously robust tool, designed to be used in even the worst of environments. It’s a beast and it’s our pick if you need a workhorse of an angle grinder. You really won’t be disappointed with the blend of clever design and raw power that the DeWalt DW840 angle grinder offers.

We hope we’ve helped you to make your mind with our review of these DeWalt power tools as well as recommendations for which tool is best for different jobs. The good thing about buying DeWalt power tools is that you know you’re getting quality. At Wonkee Donkee we have just tested all DeWalt angle grinders to allow you to pick the best of a good bunch.

What we try to do is to utilize our experience to give out buying advice for beginners. If someone doesn’t have any experience of buying an angle grinder before it can be confusing to make your way through the different specifications and knowing exactly what they mean. Our goal is to end this confusion and if you read on, you should get plenty of actionable information from this angle grinder buying guide to help you make the right decision for your particular needs. If you are interested about knowing about other angle grinders from different power tool manufacturers then you should check out our best angle grinder review to find out more.

Let’s start by breaking down the main components of an angle grinder, what they mean and why they are important.

If you’re not used to using power tools, the battery might not seem like an important component to worry over, but it is always the first on our list. Starting right back at the beginning for a second. There are two types of angle grinder: cordless and corded. In 90% of situations, having a cordless angle grinder is so useful. This is because you can literally take it anywhere with you, without having to plan ahead what power sources are available and where you will be plugging it in. Then there’s the additional practicality, cordless angle grinders allow you to get into tight places and get the perfect angle whilst operating. In contrast, these areas and positioning would be difficult to reach with a corded angle grinder option.

The key thing to look out for is that the battery is lithium-ion. One of the main reasons for this is because they are much lighter than old school batteries. You have to bear in mind that you’re holding the angle grinder for extended periods of time, or holding it at unusual and uncomfortable angels. So after using it for a while, you’ll realise that weight really matters. The other benefit is that they charge so much quicker than other batteries. Once your battery is dead, the quicker you-charge it, the quicker you can get back to work and get the job done.

When it comes to DeWalt batteries, they are designed to be compatible across a wide range of their power tools. This means you don’t need to buy a battery for every tool, and then have the headache of trying to ensure they’re all charged. You can charge 1 or 2 batteries for all the tools and clip them in and out of each power tool as you need to use them.

We’ve spoken about weight already when talking about batteries. But the weight of the tool, without the battery, is equally as important. The reason you buy a cordless angle grinder is that you want to be able to take your angle grinder with you and not have to worry about power sources. You also want to be able to work at different angles. So, it would be utterly counterproductive to have a heavy tool you struggle to hold for extended periods of time.

A good angle grinder shouldn’t weigh more than 5 lb (just under 2kg). At Wonkee Donkee, we think that any angle grinder does, then it is probably too heavy. To add to this is will more than likely mean that it doesn’t have the latest technology, and you could be losing out on performance and battery life too.

Here’s the deal with brush motors. They’re a little heavier and not as easy to maintain. They’re also louder. They are inferior to brushless motors. There’s no escaping that. However, it all comes down to what you can and can’t afford.

Simply, if you use the angle grinder a lot, its an important tool for your work and you can afford it, go for a brushless angle grinder. They’ll last a little longer and you’ll appreciate the comfort and usability benefits that come with it being lighter. But the reality is, if you don’t really need an angle grinder week in, week out, then we’d suggest going for the cheaper brush motors.

Similarly when talking about your budget. You’re not suffering by having a brush motor, they are great motors and can complete the same tasks that a brushless motor completes. You also can afford to have a slightly heavier motor, if overall it’s not a particularly heavy angle grinder. Finally, you’ll be fine with a little extra noise. After all, we’re all used to noise with power tools.